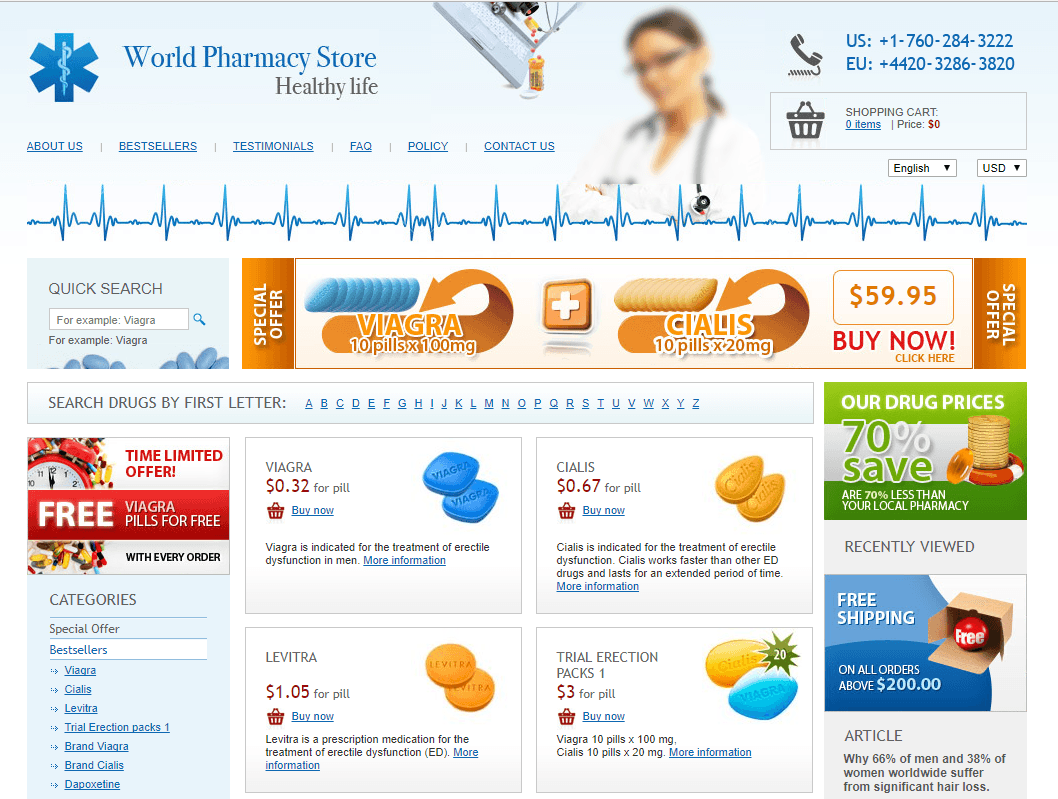 Drugstore24.co Review – Don’t Risk A Dime On This Clone Website

Drugstore24.co is a website which aims at providing a cheap, convenient, and fast service for those who shop for their medications online. I gained insight into this Canadian pharmacy store in a bid to identify as many safe and popular pharmacies as possible. This generic drugs distributor has been in the business for nearly three years. Apparently, it’s a US-based Internet pharmacy. I was having a déjà vu feeling but I pressed on.

On drugstore24.co, there is an FAQ segment which came in handy as I was itching to know if I would be directed to fill in a doctor’s prescription before placing my order. I was relieved to learn that I need not have one. The store didn’t neglect, however, to remind all its visitors to seek a professional opinion and recommendation before coming to order on the website.

The medication categories I came across included nothing out of the ordinary. I noticed sleeping pills, Gastrointestinal tract medications, muscle relaxants, anti-fungal medications, antibiotics, cardiovascular drugs, and erectile dysfunction drugs. A special category delineates the best-selling medicines in the pharmacy. It is a list filled with mostly ED drugs.

The ED medicine shop on drugstore24.co is home to a variety of tablets, and capsules. Not least among that variety are Lilly’s Cialis 20mg and Pfizer’s Viagra 100mg. 24 pills of both brands cost $106.02 and $96.23 accordingly. I went back to FAQ to view the accepted Credit cards and shipping methods. The former includes AmEx, Visa, and MasterCard. Alternatively, there’s the eCheck option. The latter comprises $10 airmail (USPS for the US) and $20 EMS delivery.

The store will resend a damaged, defective, or incorrect product. It can also refund payments. I called both numbers at the top right corner of the homepage.

The next thing I did was to bring up the “Testimonials” page. I was interested in the kind of reviews I would find there and what they would mean for drugstore24.co’s credibility. I found a good number of reviews including those beneath.

Samuel, a Spanish customer, was thankful that his request for Cialis was processed and also for receiving it. Using the medication made him request via this review that the rest of his order be additional pills of Cialis. He also extended his thanks to the customer support which he wished others would emulate. 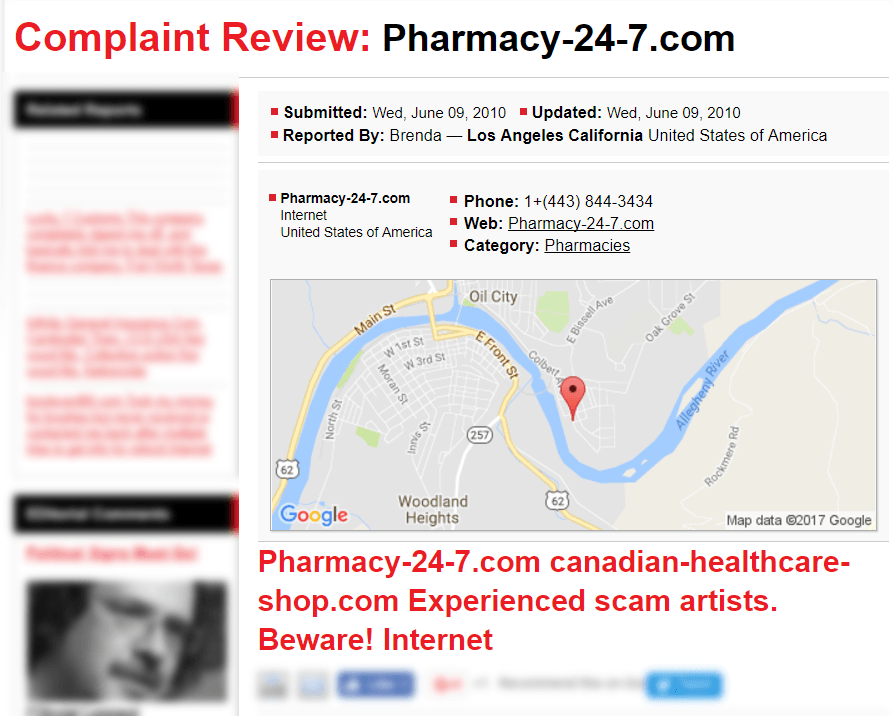 An Italian buyer named Jackson who placed two orders within days of each other, started by apologizing for a misconception that led him to believe he was being scammed. He was worried that delivery was taking too long. About a month after he placed his order, he got his meds in the mailbox and figured “the postal service must be the culprits”. He hoped “only good karma” comes to the store.

John, a Swedish citizen, at first was hesitant about ordering medicines on the Internet. He made the exception with drugstore24.co and didn’t regret it. “I can tell you that I had a good experience”. His medication was delivered and he found it effective. He was happy no prescription was required.

All of this was encouraging. But I thought it’s wise to confirm this seemingly great reputation on another site in case of foul play. To that end, I found the complaint review above from 7 years ago. Brenda from the United States said reported pharmacy-24-7.com to NFIC, FTC, DEA, and FCC for cloning that website which no longer exists. This alerted me to something I had missed entirely while touring drugstore24.com. It is identical to awc-pharmacy-24h.com – a store I had toured previously. That’s why it felt familiar! I was livid.

Drugstore24.co and awc-pharmacy-24h.com are unmistakably twin websites. My jaw literally dropped the floor when I cross-checked. I probably wouldn’t have known to check were it not for Brenda’s report. In that report, she claimed the site’s management was either Russian or Ukrainian and that they seemed to have accomplices in the US. Scamadviser.com gives a similar assessment of drugstore24.co.

It concluded that this pharmacy is probably based in the United States, but may also be from Ukraine. It also revealed that the administrative, technical, and registered contact emails are free emails. Scamadviser could not help but give a Low Trust rating and label the pharmacy a rogue pharmacy.

Scamner didn’t shy away from the truth either. It asserted in its analysis that this store doesn’t own an SSL certificate, rendering data like Credit card and bank routing information unsecured. This, in addition to its short life expectancy informed the 0% grade given as well as their conclusion that browsing and buying here is not the smartest thing to do.

I had no question in my mind that the right thing to do based on all of this information was to blacklist this pharmacy and try somewhere else.

I wasn’t surprised to learn that the scammers are well aware of the potency of bonuses and discounts. The store is armed with a lot of these offers. I have uploaded a screen grab of some of them.

So, one of them is an offer of free airmail delivery for ordering drugs which cost more than 200 US dollars. You can see that in the picture. Another thing that is apparent is a bonus offer of free ED pills on any order. You also have the option of changing the bonus pills based on personal preference. For instance, you could choose Cialis instead of Viagra.

It oesn’t end there. There is actually a category full of special offers on the “Categories” menu. It has generic Levitra, Viagra, and Cialis in combinations of two or three in “Erection Packs” and “Trial Erection Packs”. Trial Erection Pack 2, for instance, contains ten pills each of the three. I would be remiss to not mention that these bonuses and offers are exactly like those on awc-pharmacy-24h.com.

Drugstore24.co is a clone of awc-pharmacy-24h.com. I notice no difference whatsoever when I revisited that site after a complaint review warning of cloning on a defunct Canadian scam website alerted me to the possibility. Like the Canadian pharmacies in Brenda’s report, these two websites have ties to Ukraine although they tout themselves as Canadian pharmacies. All the positive reviews published on drugstore24.co are similarly fake. Scamadviser and Scamner were decisive in their respective analyses. Scamadviser gave the store both a Low Trust Rating and a Rogue pharmacy label, while Scamner, after observing the website’s short life expectancy, gave it a rating of 0 percent. I see no reason to risk a dime on any of the ED products because of the available discounts. I give it 1 star out of 5.