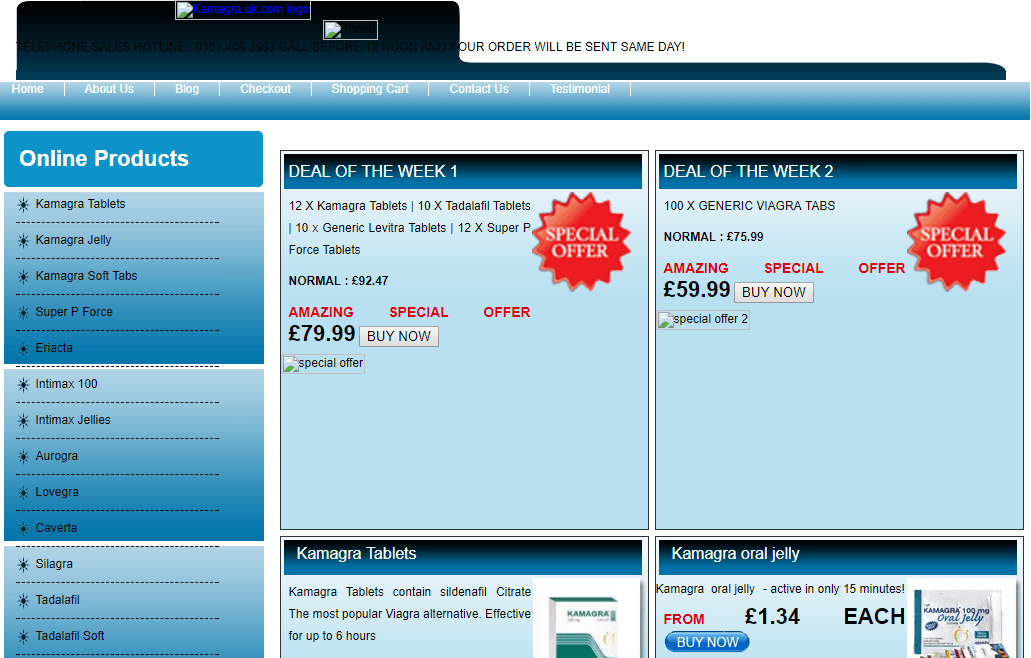 Kamagra UK is one of the out-of-business websites I’d like to discuss today. Its records were visible on the web until 2014 and during that time, the store declared that it has been operating for 8 years since its inception. Kamagra.uk.com claimed to be one of the United Kingdom’s leading online pharmacies and also claimed to sell “safe and effective” medications for the lowest prices.

The store is now offline and I can’t visit the shop anymore. However, its archived records are reachable using web archive sites. I used the Internet Archive for Kamagra.uk.com and was able to find some of Kamagra UK’s snapshots with its former details. Kamagra UK’s name gave it away—the shop was named after a world famous generic analog for Viagra, Kamagra, which is a product of the company Ajanta Pharma. Kamagra is famous all over the world, and since generic analogs are permitted in the United Kingdom, a lot of online pharmacies were able to sell Kamagra and other generic impotence meds freely on the web.

The products on Kamagra.uk.com were comprised solely of erectile dysfunction treatments, but the shop did not only stock Kamagra-branded products. Kamagra UK also sold meds from other suppliers such as Intimax, Lovegra, Aurogra, and other products. As for the cost of the products sold by Kamagra.uk.com, the shop sold Kamagra 100 mg for $7.02 for 4 tablets, Kamagra Oral Jelly 100 mg for $12.87 for 5 sachets, and Generic Levitra 20 mg for $30.90 for 10 tablets. These were reasonable prices for the products, and it was great that the store offered to sell a minimum amount of the meds per initial order. Of course, the shop did not ask for prescriptions from its consumers, so the buyers were free to purchase whatever they want from the store.

As for the payments, the shop accepted payments from VISA and MasterCard credit cards from its consumers. Concerning shipping, Kamagra.uk.com proudly stated that it offered free shipping for all its items. However, I was unable to confirm if the store indeed rendered the shipping free, since the shop is now offline. Also, I was unable to determine if the shop only catered to UK-based clients because the store did not state anything regarding the consumer locations it served.

Returns were allowed by the store, as long as the buyers return the products within 24 hours of receipt, or if the parcels were unopened by the consumers. However, returned products are charged $12.88 as a restocking fee, whether the items returned were used or unused. As for refunds and reshipments of non-received orders, the store did not discuss its policies.

Kamagra.uk.com now stands offline, so you won’t be able to reach its support team using its archived information.

Reviews, for me, are essential, as they are able to reflect characteristics of an online shop which could not be found on the store details. I was unable to find reviews for Kamagra UK from the web, though—there was nothing for Kamagra UK on review platforms and other third-party sources.

A few consumer reviews were available on Kamagra.uk.com, though. Apparently, the shop posted on-site reviews from alleged clients who experienced great service from the store during the past.

According to David S, he was helped by the Kamagra product he purchased from Kamagra UK—he mentioned being able to overcome his impotence problem using the store’s products.

Jim W also stated that the products he bought from Kamagra.uk.com also helped him conquer impotence. The message from Nathan also had the same theme—thanking the non-mentioned shop for its good and effective products.

Although these were good remarks for Kamagra.uk.com, these comments were not reliable since they were unverifiable for their credibility. On-site comments were considered unreliable because they can be manipulated by the stores owning them.

Kamagra UK did not have reviews from 2016 so I tried looking for reports for the shop from other sources. Scam Adviser had a record of Kamagra.uk.com from its database and here is the result of its analysis for the store:

The store Kamagra.uk.com did not have a good result from Scam Adviser—in fact, the store was given a 0/100 score for its trust rating. There were not many details for the store from Scam Adviser, but the shop’s location was noted as an offline store. Besides the offline status, the shop was also identified to have malware reports from the web.

Kamagra UK did not have coupon codes for its consumers, but the store gave the clients free shipping on all their orders from the store:

Kamagra UK was an online store named after Kamagra, which is a renowned generic erectile dysfunction medication. The store did not ask for prescriptions for the products, which was illegal for online pharmacies to do, but still, the stores did anyway.

Since this store is now closed, the shop may only be given a rating of 1 out of 5, and I advise that you look for new online pharmacies to patronize save for this one.