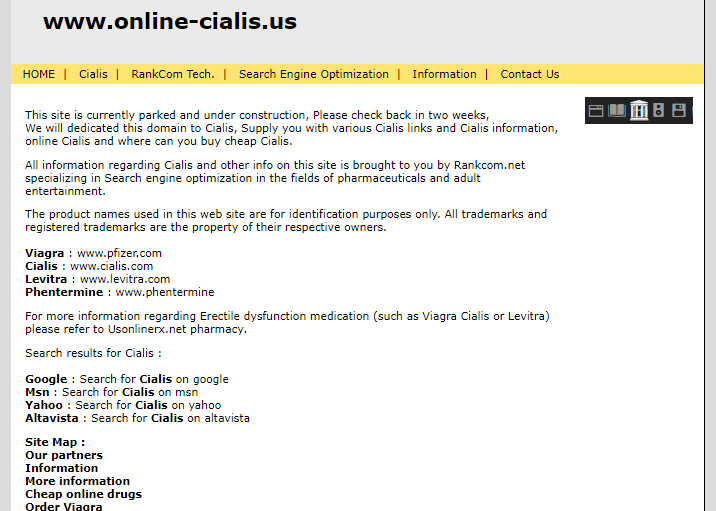 Online-cialis.us started out as an informational site for Viagra, Cialis, Levitra, and Phentermine, and the store referred the buyers to several web pharmacies with the aforementioned products. However, the store evolved as a full-blown web pharmacy which sold a wide variety of products for a long list of medical conditions. However, during my last visit to the domain, Online-cialis.us was “temporarily available”, according to the error message.

In order to gather more data for this web pharmacy, I used the Internet Archive Wayback Machine, and I was able to view snapshots of the former drugstore spanning from 2004 to 2016. The records on the web archive for Online Cialis US were able to capture the evolution of the store from its basic form to its full-store website for medications. There were no data concerning the specific details for the shop, though, but since the domain’s extension was “.us”, we can assume that the website was hosted in the United States.

The products offered by Online-cialis.us encompassed medications for male enhancement, general health, bodybuilding, diabetes, dental whitening, skin care, depression, blood pressure management, and others. There was no information regarding the FDA approvals of these medications—I was not sure if these meds were FDA certified since most of them were mostly generic analogs of the brand medications. The brand-name labeled products on Online Cialis US, though, were certainly approved by the FDA. As for prescriptions, there was no talk about the store requiring the clients to provide their written Rx for their orders.

Online-cialis US’ best sellers were the impotence treatments. The store sold Viagra for at least $0.99 per pill, Cialis for at least $1.95 per pill, and Levitra for at least $2.82 per pill. These unit prices, though, were for the bulk order prices for the medicines. According to the records available on Online-cialis.us, the buyers were allowed to pay for their orders using their VISA, MasterCard, AMEX, Diners, and JCB cards.

I was unable to get the shipping rates for the items sold by Online Cialis US, though, because there was nothing stating the rates on its archived records.

Concerning refunds or replacements, the store offered to replace products or refund payments if the orders were not received by the buyers or if the orders received were damaged. Online-cialis.us also accepted returns, provided that the items were in new condition and were not tampered with.

I was expecting a plethora of consumer reviews for the store Online Cialis US, but the shop did not have external web reviews from reliable third-party platforms. The shop only had on-site reviews which were all positive, but unreliable due to their possibly compromised nature.

Despite the long web existence of the shop Online-cialis.us, the store failed to have reliable comments for its service from various third-party platforms. Online-cialis.us did not have reviews for the present year, so in order to identify more details for this web platform, I used several domain assessing sites:

The website Scamner.com gave a 0 out of 100 score for the shop Online-cialis.us because of its missing security certificate. According to Online-cialis.us, the domain is bound to expire in a few months and that despite its long internet service, had no trust records which can attest to its reliability as an online selling platform.

According to Scam Adviser, though, Online-cialis.us was a “new site without feedback” with a trust score of only 54 out of 100. Also, according to more details for the shop on Scam Adviser, the shop is now an offline website and is not working. Online-cialis.us was also discovered to have free email addresses used in its setup, which made the domain risky.

Although web pharmacies are usually generous when it came to discount offers, this particular store only offered freebies for its clients and had none of those discounts and voucher codes.

Online-cialis.us also did not have offers of free shipping for its products, even for those clients with orders of a certain purchase amount.

Online-cialis.us was an online pharmacy with a long history but had not one external review to attest to its reliability or excellence when it came to service. Online-cialis.us only had copied on-site reviews and the store did not even bother to strive for organic reviews for its performance.

Online-cialis.us, despite its name, did not only have Cialis to sell, the store offered a wide product range involving both generic and brand-name products. Online-cialis.us did not ask for prescriptions for its products, which, though common, was illegal.