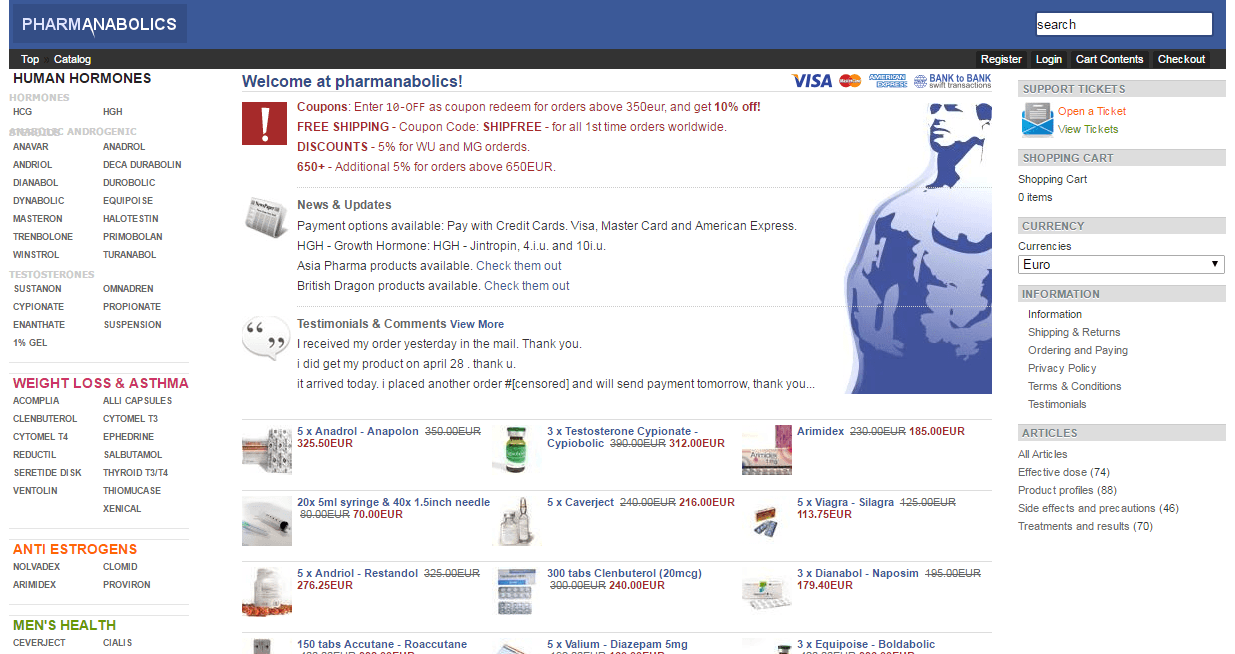 Pharmanabolics.net is an online shop selling mostly anabolic steroids, human hormones, and general health products. The shop has records online since 2004, which means that the shop operated earlier than 2004. However, the shop’s domain is now inaccessible, even via the use of a proxy server. Fortunately, the shop did have records from an online archive site, so I was able to source information for this online pharmacy.

Despite the available data for Pharmanabolics.net, the shop’s records did not say where the shop operated from. Pharm Anabolics only stated that its business is completely legal, but offered no proof of the legality of this shop’s operation. The meds available on the store included hormones (HCG and HGH), androgen products (Andriol, Dianabol, Winstrol, Masteron, and others), anti-estrogens (Nolvadex, Arimidex, Clomid, and others), weight loss products (Clenbuterol, Reductil, Ventolin, and others), men’s health meds (Kamagra, Silagra, Cialis, and others), and other medical products for depression, psychosis, herpes, addiction, anemia, cholesterol management, and several products. Pharmanabolics.net offered its products for the buyers even without them sending their prescriptions, but the store also warned the buyers that they should prepare their Rx in case their countries are requiring prescriptions for their medical orders.

Since the store’s now offline and inaccessible, I was unable to determine the shipping rates charged by Pharmanabolics.net to its buyers. However, the store mentioned that it is offering free shipping for all orders from new customers. As for the payments, the shop allows payments via credit card and EasyPay, although the buyers are only limited to orders of worth $500 per day. Besides the credit and EasyPay payments, the store also allowed payments using Western Union, MoneyGram, and bank wire transfers.

Pharmanabolics.net guaranteed that buyers are going to receive their orders 99% of the time, but in case they don’t, the shop advised the consumers to contact its support team for the resolution of the concerns. Pharmanabolics did not state if it re-shipped orders or refunded the buyer payments in the case of order losses or damaged products. The shop, though, advised that its buyers wait up to 3 months for their orders to arrive, since the transit may take a while.

Pharmanabolics did not have consumer reviews from the web despite its lengthy internet service. However, the store did post some “consumer comments” from its presumed former buyers, although on-site only.

Only the initials of the buyers and their comment dates are included per testimonial, and most of the buyers thanked the shop for their orders which they were able to receive. All of the testimonials for the store are positive, and there wasn’t any shred of negativity posted on the platform.

Even if the comments were positive and uplifting, these comments are untrustworthy due to their on-site nature. We can’t trust these comments to be true because they were probably created by the store to encourage more buyers through fake testimonials.

There was no information on the store concerning the shop’s closure, but since the store appears to be closed for some time, the shop was unable to garner reviews for 2017. Because of this, I tried searching for clues for the shop’s domain from various site-checking platforms.

According to the analysis from Scam Adviser, the shop Pharmanabolics.net is a “rogue internet pharmacy website”, due to several concerns found related to the shop’s domain. Overall, buyers were instructed to keep their distance from this online store.

Deals offered by Pharmanabolics to its clients included free shipping for new clients using the code SHIPFREE during checkout.

Apart from the free shipping for first-time clients, the shop also offers the coupon code 10-OFF for buyers with orders greater than $391.77. This coupon allowed the buyers to have 10% off their purchases from the store.

A 5% discount was also awarded by Pharmanabolics.net to its clients using Western Union and MoneyGram, and the store also gave an additional 5% off for orders greater than $727.58.

Pharmanabolics.net is an online steroid store which offered a hefty product range for bodybuilding enthusiasts and individuals with general health concerns. Although most of the offers on the store are for bodybuilders and individuals under hormone therapy, the shop also offered meds for depression, anxiety, sexual health, and other concerns.

The shop offered erectile dysfunction meds, but the store had prices which were a tad expensive than other online pharmacies. No reviews were accessible for the shop—Pharm anabolics did not have mentions on the web for its service. Due to the current state of Pharmanabolics.net and its lack of reviews, I am rating the store 1 out of 5.