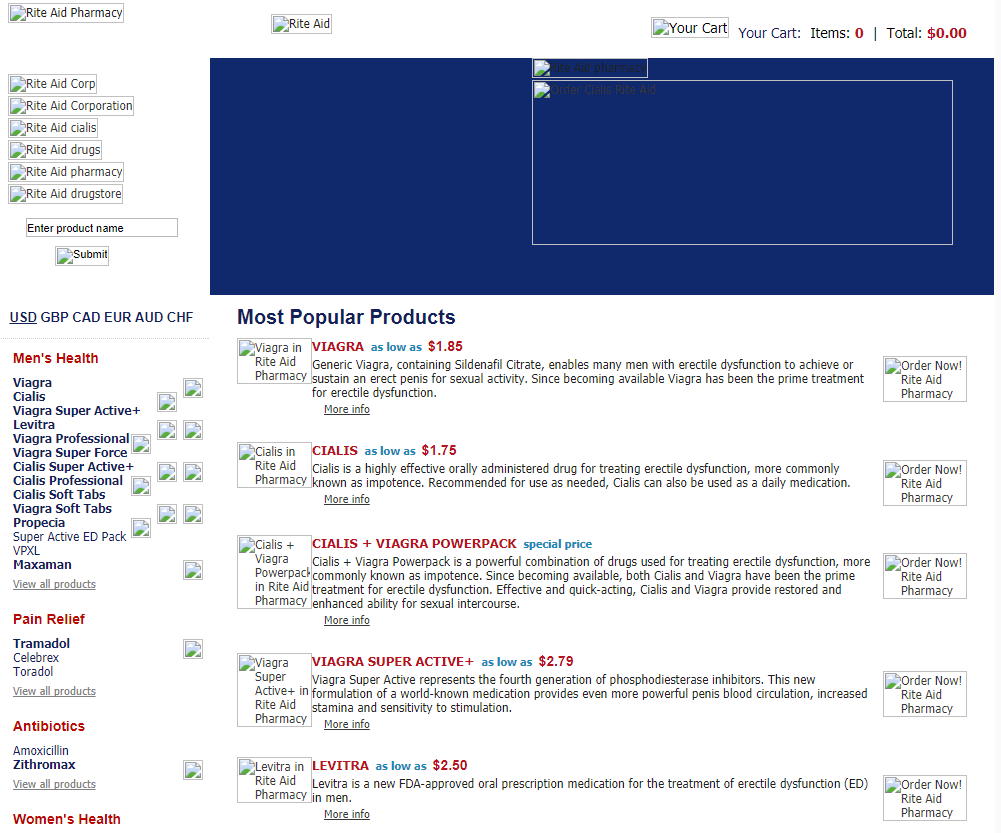 Rite-aid-pharmacy.com Review – E-Shop Shut Down by the Government due to Illegal Activities

According to the records available for Rite-aid-pharmacy.com on the Web Archive site, the shop’s domain was seized by the government since 2013, so the shop functioned until 2012. The earliest records for the store indicated that it operated since 2004, but the store’s international license number was issued May 2007. The shop operated from Texas and also claimed to be licensed by the Texas Board of Pharmacy.

There are some observable details on the web archive site for Rite Aid Pharmacy, although some of the images are not able to load. Based on the available data for the store, the products formerly sold by Rite Aid Pharmacy are products for men’s health, pain relief, antibiotics, antidepressants, mental health meds, sleeping aids, cholesterol medications, and several other products. The famous products on Rite-aid-pharmacy.com, though are generic impotence products (Viagra, Cialis, Levitra, and other variants), plus Human Growth Hormone, and Ultram.

Since the store’s now closed, I failed to check how much the store asked for its shipping, although it was indicated on the shop that the store had two shipping options, the EMS or express courier and the regular airmail delivery, which is the default shipping method used by most online drugstores. Payment methods honored by the store included VISA and MasterCard credit cards, as well as E-checks.

The consumers were only advised by Rite Aid to contact the support team using its ticketing system, as the store did not advertise its phone numbers and email.

Reviews for Rite Aid Pharmacy are not available from third-party sources, but there are reviews available on-site, from purported consumers with good experiences with the shop. Here are some of the testimonials available on Rite-aid-pharmacy.com:

According to Thomas Mann from Germany, his wife purchased sexual health medications for “fun” and he was glad that they worked.

Stephen Freiman, on the other hand, related how he found Rite Aid Pharmacy when he was looking for a place to purchase reliable meds from for his sore throat which never went away. He mentioned purchasing Zithromax from the shop and thanked Rite-aid-pharmacy.com for the effective medication.

More comments are still accessible for Rite Aid Pharmacy, but since the feedbacks are only from the shop, they are not considered as 100% reliable and therefore should not be taken at face value.

Because it is difficult searching Rite Aid Pharmacy reviews on the web, I used the services of several reliable online platforms to verify the domain status of Rite-aid-pharmacy.com:

Overall, the rating of Legit Script for Rite Aid Pharmacy is “rogue”, or the lowest possible rating for any online platform. According to more details on the report, Legit Script evaluated Rite-aid-pharmacy.com and found that it did not meet the legitimate pharmacy practice standards.

As for its age, Rite-aid-pharmacy.com was created in 2011 and the store’s domain expiry was set in September 2015.

Scam Adviser also detected a rogue status for Rite Aid, similar to the status given by Legit Script. According to the details for Scam Adviser, the store’s age is almost 5 years and that the domain is linked with several high-risk websites and is operating from a high-risk country.

Rite-aid-pharmacy.com is now closed—the shop today has a message from the United States government that it was a site involved in the illicit distribution of counterfeit products. The store was also known to dispense meds without prescriptions, which is flagrantly illegal as well.

Although Rite Aid Pharmacy is recognized as a seized domain, the shop did not have complaints from its former consumers on the web. The store, though, did not also have consumer commendations for its service. My rating for this closed shop: 1 out of 5.