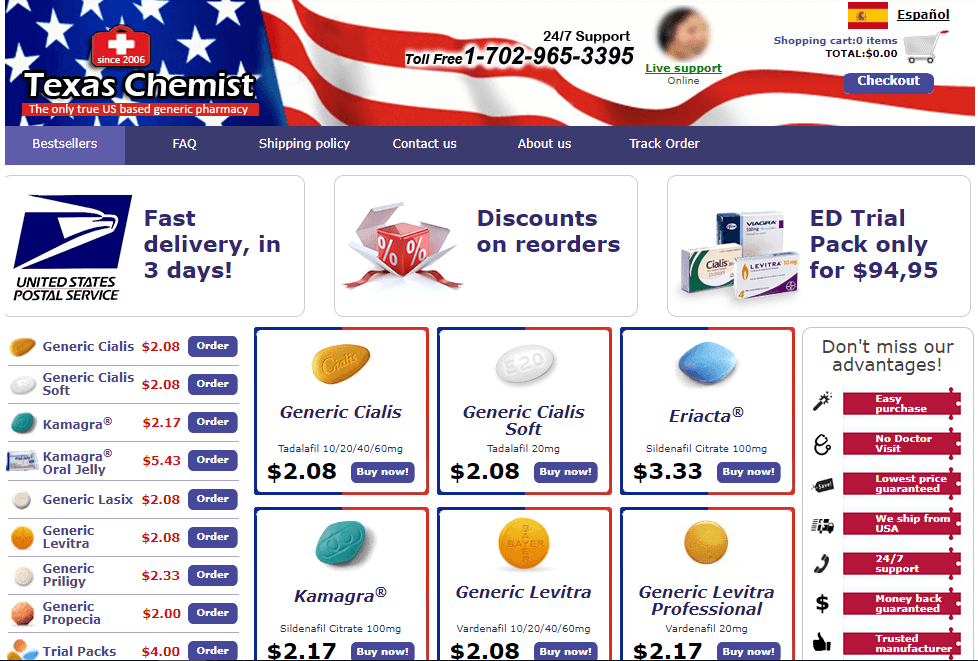 Texaschemist.com Review – Transferred to Another Domain

Texaschemist.com is a US-based online drugstore which catered to clients in the United States. The store had a flurry of good reviews on the web, which indicate that the store was a good shop able to maintain its good service as the years went by. Today, Texaschemist.com is now closed, although pieces of information for its past service are accessible using the web.

According to the store’s archived information, Texas Chemist began operating in 2006; however, records for Texaschemist.com were only available in 2014 the earliest. According to the store data, all of its products were stocked in the USA, but these meds were actually sourced from India and were approved by the Indian FDA.

The store only sold impotence medications which it condensed in a single list on its left-hand corner. The store sold generic parallels of famed impotence treatments such as Sildenafil Citrate, Tadalafil, and Vardenafil HCl, and sold peculiar variants of the products such as oral jellies, soft pills, “professional” pills, and several others. Texaschemist.com carried prominent Indian brands for these impotence medications as well, such as Kamagra, Eriacta, Avana, Tadacip, plus others. Besides the impotence treatments, though, Texaschemist.com also stocked Generic Xenical for weight loss. Apart from Xenical, there were several other non-impotence treatment products available on Texas Chemist.

Texaschemist.com advertised low prices for its products, but the store actually sold the meds in costs cheaper than the typical local drugstore prices. The store asked for $2.08 to $8.00 per pill for Generic Cialis, $2.08 to $8.50 per pill for the Generic Levitra, and $2.08 to $9.00 for the Generic Viagra. The highest individual pill prices were for the minimum purchases (10 pills) while the lowest prices were for the bulk order prices (at least 120 pills). These pills were paid for by the consumers using their credit cards.

Since the store is now offline, I was unable to discover how much it charged for the shipping, although I discovered that the store shipped orders using a “regular” and a “fast” option.

Returns were not discussed anywhere in the store, but the store offered to return the consumer payments in case of non-delivery of the products.

Buyers, then, were able to contact Texas Chemist using its mobile numbers and its email box.

I was surprised to find good reviews for Texas Chemist from one external platform, Mywot.com. Several buyers gave positive remarks to Texas Chemist:

According to Nick017 (March 2015), he had a “good experience” with Texaschemist.com, as his orders arrived quickly. His only regret was that the store only had erectile dysfunction meds and no other products.

Shravan.nair (April 2015), on the other hand, mentioned that he purchased from Texaschemist.com in March and he had no issues when it came to his purchase. Overall, he felt that the order process was convenient.

The recently moved store was still able to gain reviews from its customers. Here are some examples of buyer reviews available for the Texas Chemist shop:

Arthur was one who rated the store 5 out of 5 points and related how he was first irresolute about ordering from Texas Chemist. Whilst this was the case, in the end, he was glad he took a chance with Texas Chemist—according to him, the generic drug he ordered from the shop was effective and gave him what he needed.

Newman also rated the store 5 out of 5 stars for his recent generic drug order. Needless to say, Newman was a happy camper and appreciated the quality of the items he received from the store. Newman also found the 3-day order progress commendable.

Coupon codes did not exist on Texas Chemist, but the store did have several offers for its consumers such as discounts for repeat purchases:

Texas Chemist is a closed online store with good reviews from other consumers on third-party websites. This means that Texas Chemist did the best it could for its buyers and though now closed, the shop may still be given a 5 out of 5 score. Texas Chemist did not totally leave the online pharmacy world—it only moved to a new domain which you can visit for your generic drug needs.